This past week, I attended six of the nine games in which my two grandsons—Austin and John—took part. This baseball immersion has allowed me to locate the best snow cones (Altamahaw Ossipee Park, Burlington) and the best climbing trees and playgrounds for granddaughter Brenley Isabella (Caswell Parks and Recreation), as well as the ball fields where the direct sun beats unmercifully down on your head no matter where you sit (McCrae Park).

The immersion experience takes me back almost sixty years to the earliest memories of my older brother, Allen, playing little league, junior league, and high school ball.  Between March and August, the entire family;s life revolved around the sport. Allen kept a beaded dirt-ring around his neck and slept with his glove.  Nearly sixty years later, it pleases me to know that both grandson’s share their uncle’s obsession. They travel with gloves and play catch outside with only the lightning bugs for lamination until the darkness drives them indoors. 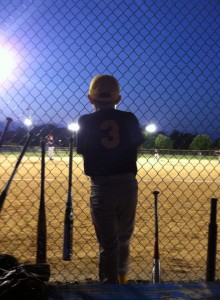 never a real “player,” I had passion for the game. In 1966, I skipped school to watch my beloved Baltimore Orioles (Frank and Brooks Robinson), beat the defending champions–Los Angeles Dodgers (with Sandy Koufax)–in the World Series.

When Earl Weaver came on board as Oriole manager 2 years later, my joy was complete. Although he was ejected from 91 games, kicked dirt at the umpire, and had the foulest mouth in baseball, he had panache and a wicked sense of humor.

During one altercation, Weaver headed toward the dugout screaming, “I’m going to check the rule-book on that.” When the umpire taunted, “Here, use mine.” Weaver yelled back, “That’s no good – I can’t read Braille.” (I wish I had had that line during one particularly egregious call last week.)

When Bart Giamatti, Yale University President, became President of the National League and then Major League Commissioner, I was ecstatic. Here was someone who understood what the game symbolized for me. His tenure as Commissioner, alas, lasted 150 days.  Eight days after the Peter Rose scandal was settled, Giamatti died of a heart attack.

At the announcement of Rose’s banishment, Giamatti stated, “I believe baseball is an important, enduring American institution. It must assert and aspire to the highest principles, of integrity, of professionalism of performance, of fair play within its rules.”

But my baseball . . . is about childhood, innocence, and nostalgia for something that maybe never even existed. Although last week, I watched as a few opposing coaches berated players and intimidated refs, I also witnessed the coaches for my grandsons’ teams—Cody Johnson, Troy McCanless, Ken McMillan, Rick Humphries—support the players and use unforced errors as teaching tools. These volunteers work long hours in the hot sun to teach our children the joy of baseball and the rules of the game, as well as the importance of hard work and good sportsmanship.

I would like to say that the boys’ teams will win all of their games, but, alas, games will be lost, errors will be made, tears might be shed. Giamatti once said that baseball “is designed to break your heart.” However, he wasn’t talking about losing a game; he was referring to the season’s end. Either way, the lesson is the same: “The game begins in spring and blossoms in summer, filling the afternoons and evenings, and then as soon as the chill rains come, it stops and leaves you to face fall alone. You count on it, rely on it to buffer the passage of time, to keep the memory of sunshine and high skies alive, and just when the days are all twilight, when you need it most, it stops . . . And summer is gone.”